Most targets who are monitored may not necessarily know there are monitored. In some cases, targets could be monitored illegally. This is as hideous as stalking. There are laws governing the use of GPS trackers.

However, each of these laws are unique to your countries of residence. There are also countries who are insensitive to these acts.

Whatever the case may be, it is important that GPS trackers be used within the bounds of governing laws. This will help to maintain sanity and not use technology to infringe on the fundamental human right to freedom.

Finding out or even suspecting the fact that you are monitored, calls for proactive measures. This is where the skill of how to jam a GPS tracker comes in handy.

GPS trackers differ, and their modes of operation do also. To be able to disable or jam a GPS tracker, you may need to understand the category of GPS tracker in use. This will enable you to act accordingly.

Broadly speaking, there are three categories of GPS trackers. Although they all use the global positioning systems, their mode of operation differs. There are also other specialized types of GPS trackers such as the OBD (onboard diagnostics) and GPSs for covert operations.

The active GPS tracker or the data logger as it is sometimes called picks up the location of the target under surveillance and stores it internally. This category of GPS trackers does not transmit their positions to some remote monitoring system nor function using the internet.

They usually contain in-built memory slots for memory cards or even hard disk drives for storing the locations of the target in the case of a moving target. They are designed in such a way that the data they store are easily retrievable by connecting them to a computer.

In such instances, they are equipped with USB ports to enable them to be connected to the laptop using USB cables. In other cases, the memory card of the hard disk is removable. Here, the GPS tracker does not need to be removed. The memory card or hard disk drive is retrieved and replaced.

You get such removable storage devices on Amazon.

The Active GPS Tracker of the Data Pusher

The active GPS tracker is named active because it is always actively online as long as there is internet or cellphone network within the location. It is also called a data pusher because it transmits data on call to a remote monitor.

Unlike the data logger, the data pusher in its primitive form does not save locations but transmits the location of the target as impulses. Some are designed to transmit their locations per minute while others do so in seconds, even in fraction of seconds.

The primitive form of data pushers has a major setback. In the absence of internet service or cellphone network, the GPS tracker device is unable to transmit coordinates.

If it’s not equipped with a data logger function, then its location is lost and cannot be known until such networks are available again.

The GPS Transponders or the Data Pullers

The data pullers form a new niche of surveillance technology called the Push Technology. The GPS transponders are always on stream and can be queried at all times.

Just as the name implies, transponders respond to queries from the user. They do not initiate communication at intervals as seen in data pullers.

There are instances where the data pullers are programmed to pull data continuously at intervals. In such cases, the data puller is made to work in a similar manner as data pushers. This generally puts a lot of pressure on the transponder systems and could result in system failure in adverse situations.

In response to this pitfall in the transponder technology, the WebSub protocol was devised. It was designed to improve on the older RSS protocol. It works in the similitude of active systems without adversely overburdening the server by providing real-time notifications.

This improves on the system of RSS feeds where a user has to make requests by creating periodic polls to the server in no particular manner.

The Onboard Diagnostic GPS Tracker

This is the type of GPS tracker that most car manufacturers embed into the vehicle system as a curative measure against theft.

They are designed to fit into the regular utility component in cars to avoid being easily spotted or identified. They help in constantly showing the location of the vehicle in the case of robbery. You may need to purchase an OBD tracker in case your vehicle does not have one.

Because of the purpose they serve, they are usually wired into the vehicle’s electrical system. This means that they do not need to be retrieved for charging at intervals like the ones used for covert operations. They are slotted into a designated OBD port in the car.

OBD GPS trackers have antenna built into them coupled with a GPS module that aids in signal reception. 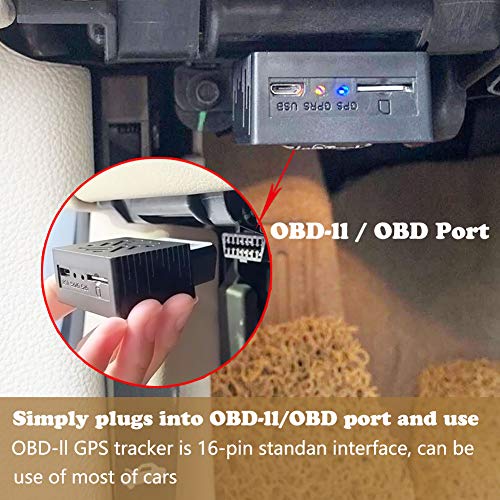 OBD systems do more than just transmitting locations. They are sometimes equipped with microprocessors that are connected to other parts of the vehicle. Because they convey information like the vehicle speed, fuel consumption rate, and other information required for vehicle diagnostics.

This type of GPS trackers is used for cover operations. They are usually hidden and are usually of the hybrid type. Hybrid type in this sense means that they are able to transmit real-time data to a remote monitoring server and at the same time save the data in a memory device in the GPS tracking device. You can learn more about GPS trackers here.

How to Jam a GPS Tracker

The Use of Jamming Devices

One of the proactive measures for protecting oneself from being illegally monitored is by the installation of GPS jammers.

GPS jammers are devices that use radio frequencies with the goal of interfering or blocking GPS signals from GPS tracking device within its range of influence. Its influence is not restricted to jamming navigation signals, but also all other forms of GPS signals.

IF need be, you can purchase one from available online stores.

They are designed to be small in size and placed as close as possible to the GPS tracker. They are incredibly easy to install and use. All you need to do is plug it into the phone charger port or the cigar lighter port.

From all indications, its operation requires little or no skills or training at all to use. This fact obviously does not sit well with some folks. This is because it hands every Tom, Dick and Harry the technology to get away with just about anything.

As much as this solves the problem of stalking and in modest cases, illegal and unauthorized monitoring; it gives elements with criminal tendencies the tool to get away with crime.

Here is a video that further explains this process:

The use of Aluminum thin Foil

This method is simple and easy to implement. First you have to purchase a roll of aluminum tin foil which is commercially available in the market.

Other unconventional methods of killing off the signal of GPS trackers placed in vehicles include burying the car in an underground garage or in a steel container.

Is the Use of GPS Jammers Illegal?

For most of the time, the use of GPS jammers is illegal. In some countries, any and every technique geared towards jamming or deactivating a GPS tracker is illegal.

Although this is only valid to the point where the GPS tracker is planted without due authorization from a court. It is even illegal for law enforcement agents to plant a GPS tracking device in your vehicle without getting a clearance from a court of law.

These measures are put in place to ensure that whatever purpose for which these devices are used, do not infringe on the rights to a private life which every citizen is entitled to.

If such permissions are granted for the use of GPS trackers, then the issue at hand must be a matter of national security or that such persons constitute a threat to life or peace of a people.

However, in most cases as already earlier pointed out, GPS trackers that are in-built in vehicles are put there for the security of the car and the car owner. Other uses of GPS trackers are in fleet management. In such cases, it is planted by the organization for monitoring their trans-route buses.

If you tamper with the GPS trackers in these vehicles, you are obviously engaging in a criminal act.

GPS jammers have beaten the conventional GPS systems as far as surveillance operations are concerned. This is threatening.

In response to this, a lot of countries have made laws that ban its use. It is also forbidden to sell GPS jammers in such countries. Laws like this are already effective in the United States and in most European countries.

However, there new types of GPS systems which are already in circulation, although not yet common whose signals cannot be jammed by GPS jammers. They are already being used in modern vehicles.